A beekeeping dog has been trained to sniff out a killer disease which wipes out hives and even has his own suit to protect him from stings. Bazz the black labrador was specially trained by beekeeper Josh Kennett to detect by smell a killer bee disease called American foulbrood. But Mr Kennett was forced to design him his own beekeepers suit after he kept getting stung while saving the buzzing insects.

Now, the dog has to suit up every time he goes out to the hives. The beekeeper, from Tintinara in South Australia, created the incredible suit after a long process of trial and error. Mr Kennett said: ‘The process of training Bazz and developing the suit has been an attempt to find a better way of controlling American foulbrood disease. ‘There is no cure for the disease.

‘Detection and quarantine processes are essential to save our bees. I realised that Bazz was able to sniff out the disease, and save thousands of bees – but he didn’t like being around them too much when he was getting stung. ‘So I’ve tried to develop a suit the dog can wear and hopefully avoid being stung.’ 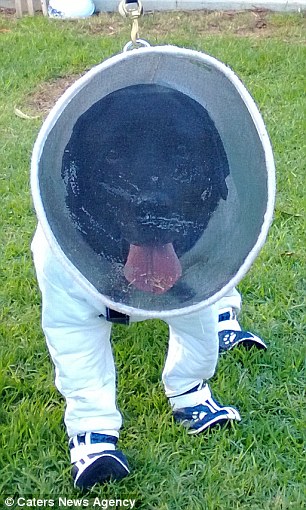 The suit is created to protect the dog as it attempts to detect the devastating disease which wipes out thousands of beehives every year. The fatal Paenibacillus larvae caused by the infection are usually only visible under high-magnification microscope, but thanks to Bazz’s mesh protected nose, that’s not necessary.

The dare-devil dog is protected from bee attack to let him get close enough to sniff out the hives. After a lengthy training regime Bazz was ready to take on the challenge and began detecting the disease. Mr Kennett said: ‘We’ve now proven the concept, he can find the infected hives.

‘The only challenge now is getting the dog comfortable with the suit. It’s hard to change a dog’s habits overnight. ‘To fully cover a dog up and expect it to do the same thing, it takes time to change how he behaves and to get used to that suit. ‘But he’s a quick learner and he’s never let us down before.’

American Foulbrood is caused by a spore forming bacterium called Paenibacillus larvae.  These spores are the infective stage of the disease and infection begins when food contaminated with spores are fed to larvae by the nurse bees.  Once in the gut of the larva the spores germinate, bateria move into the larval tissues, where they multiply enormously.

Barking up the wrong bee